The circles represent Percent Probability of High Atmospheric Pressure (+); from 50% (smallest circle) to 100% (largest circle). Areas of High Pressure are typically warm to hot, and colored in shades of red/yellow.

The rectangles represent Percent Probability of Low Atmospheric Pressure (-); from 50% (smallest rectangle) to 100% (largest rectangle). Areas of Low Pressure draw in cool to cold arctic source air, and are colored in shades of blue.

Expect the G/WX Long-Wave pattern to be the primary feature during any two or three-day Map Period, and the occasional 4–day Map Period.  The G/WX forecast Long-Wave Pattern often does not fully mature until the last day of the period, as in the some of the samples as the comparative ‘actual’ NWS maps indicate.

The G/WX Maps cannot show Short-Wave impulses embedded in the Long-Wave Pattern. These disturbances can generate significant short-term local weather. Therefore, it is important to pay attention to the ‘Verification Guidelines’ at the end of this section. 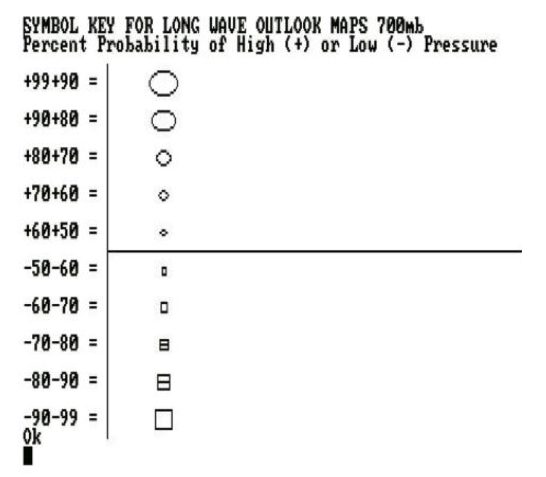 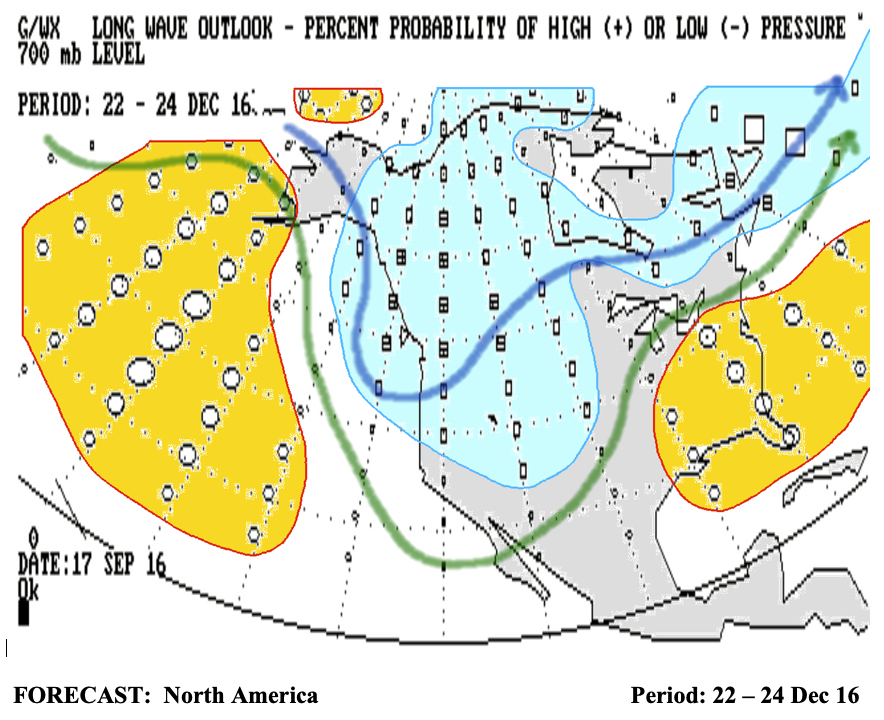 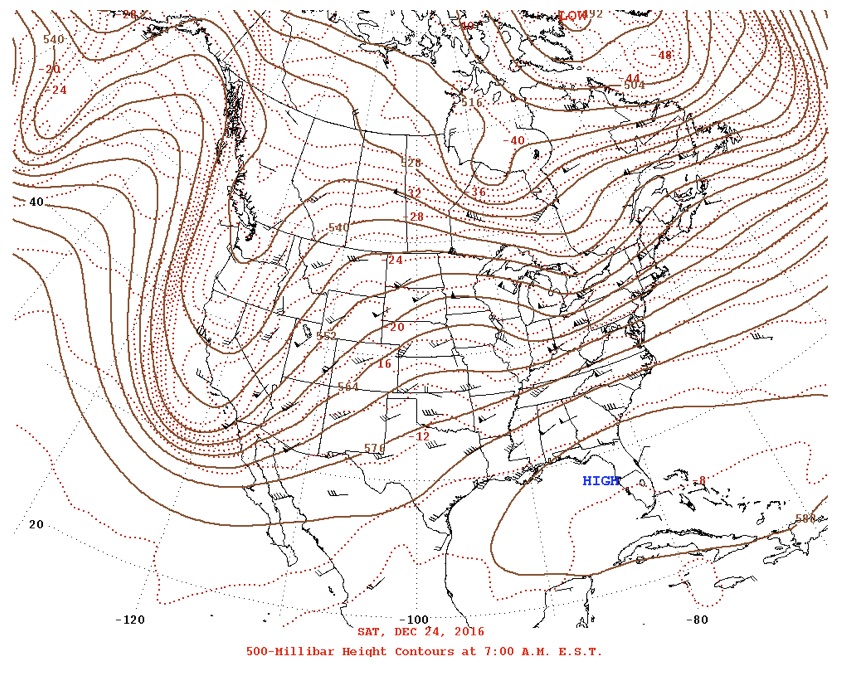 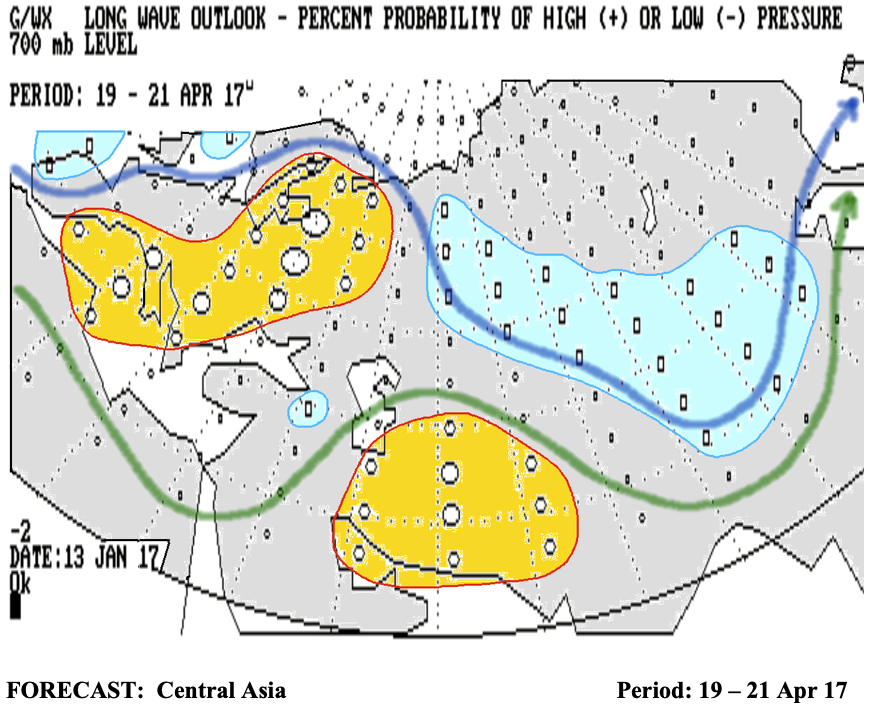 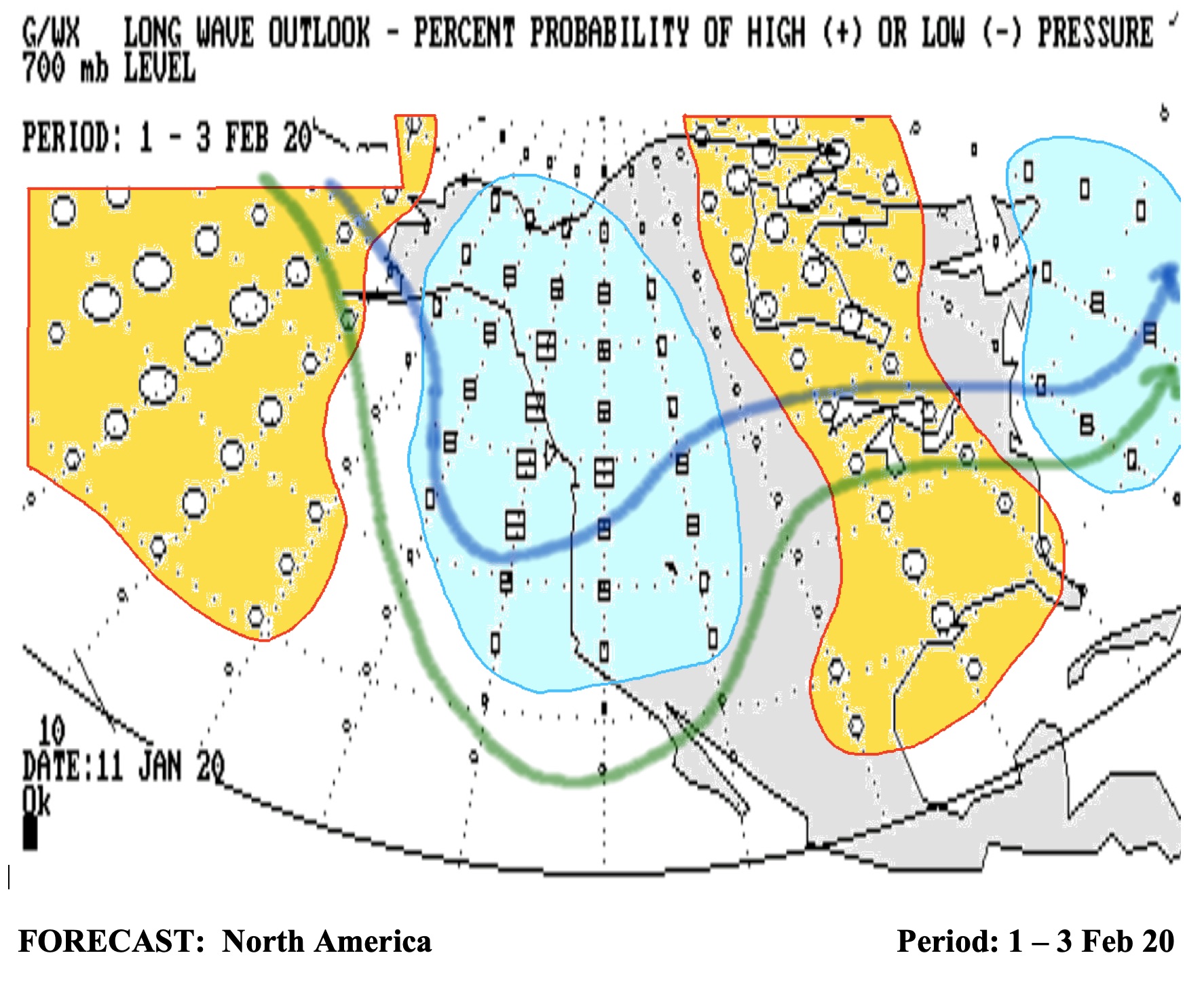 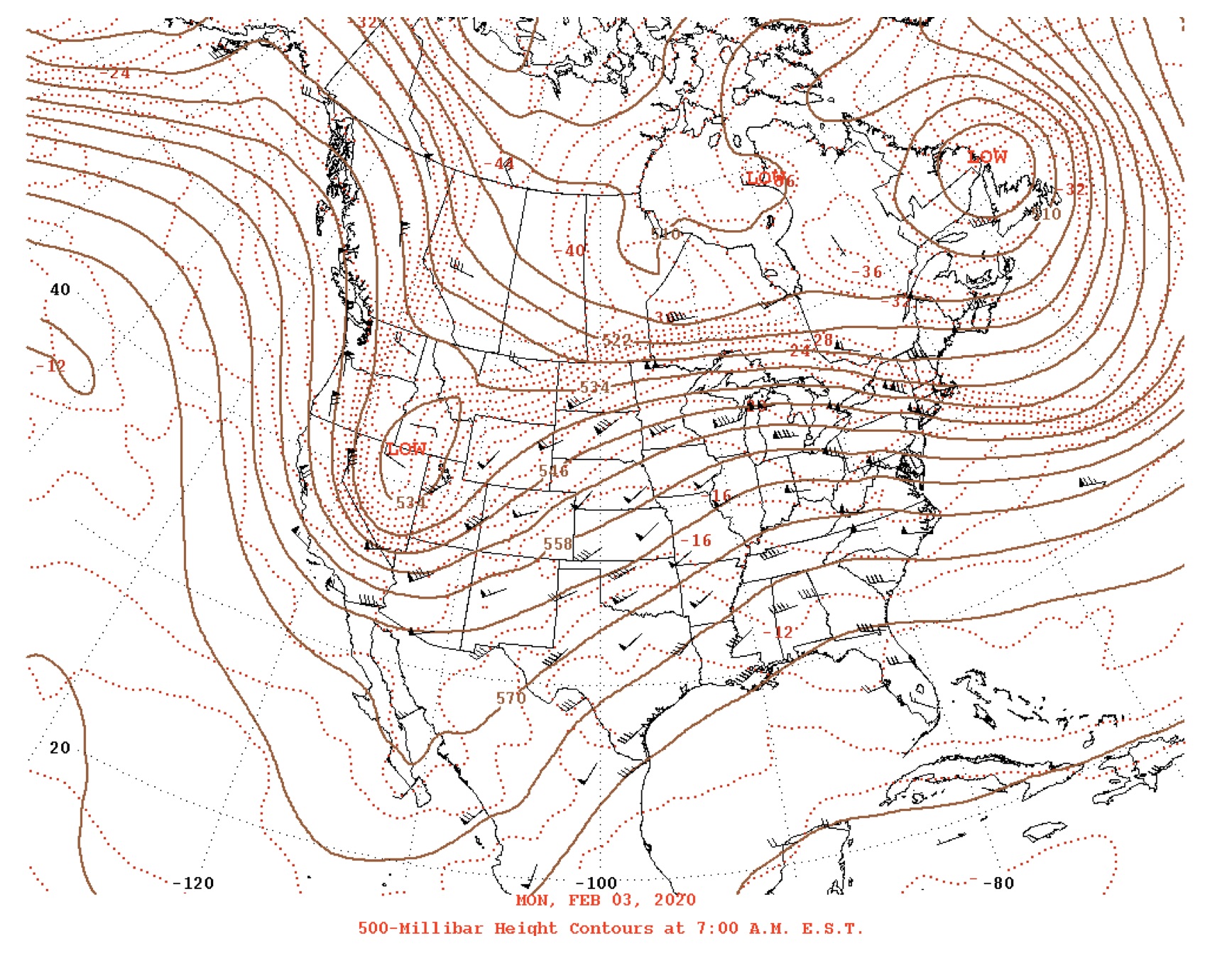 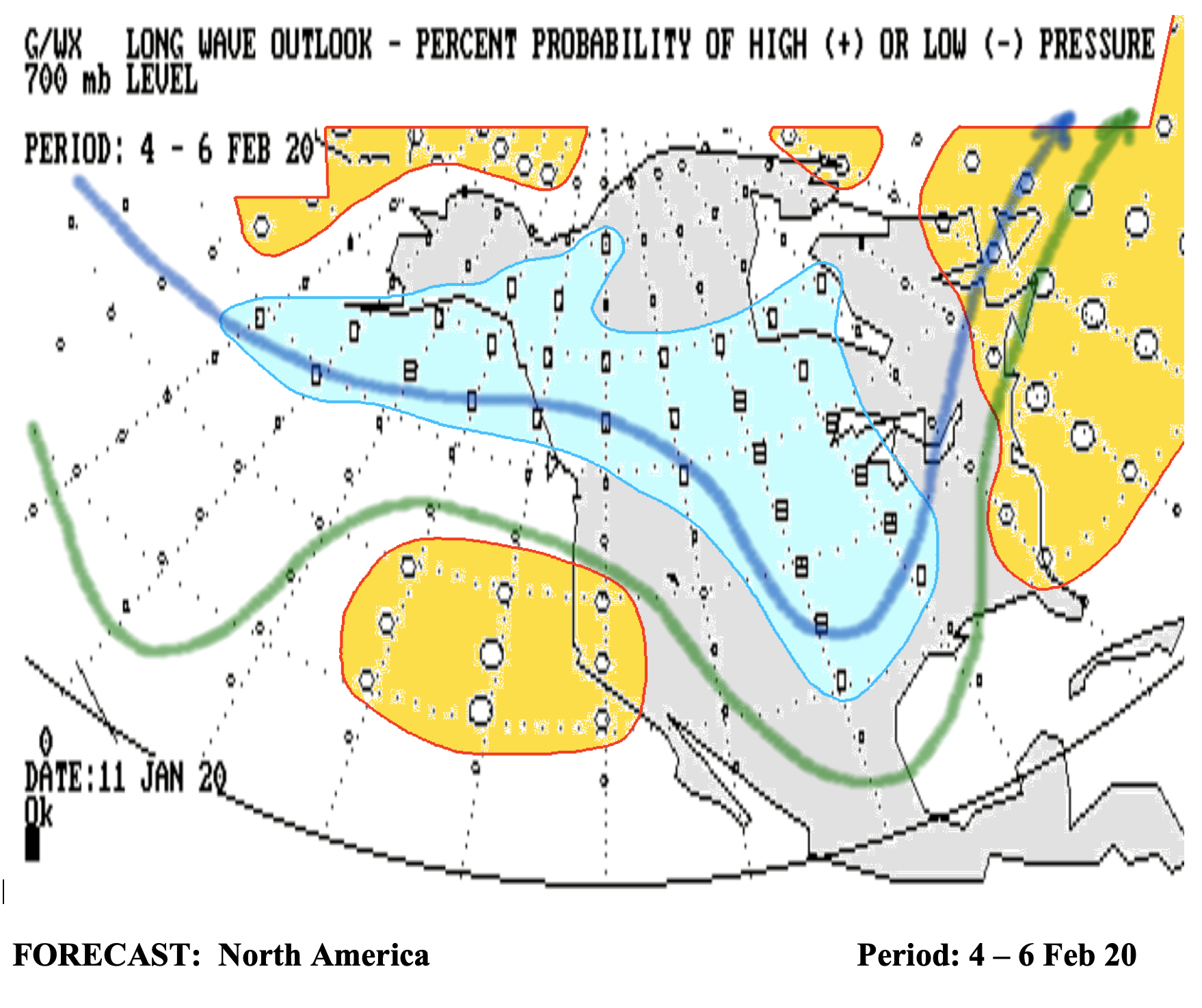 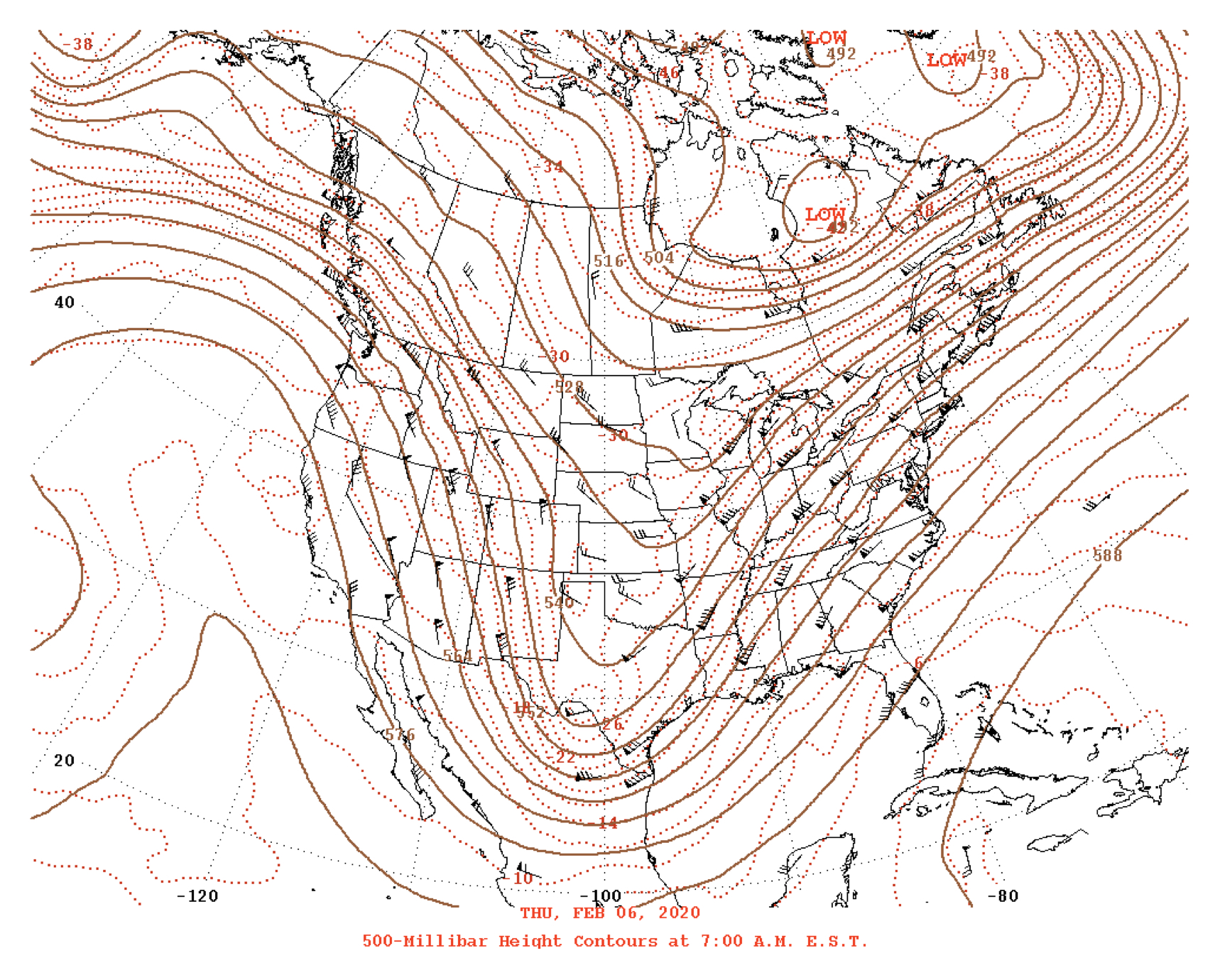 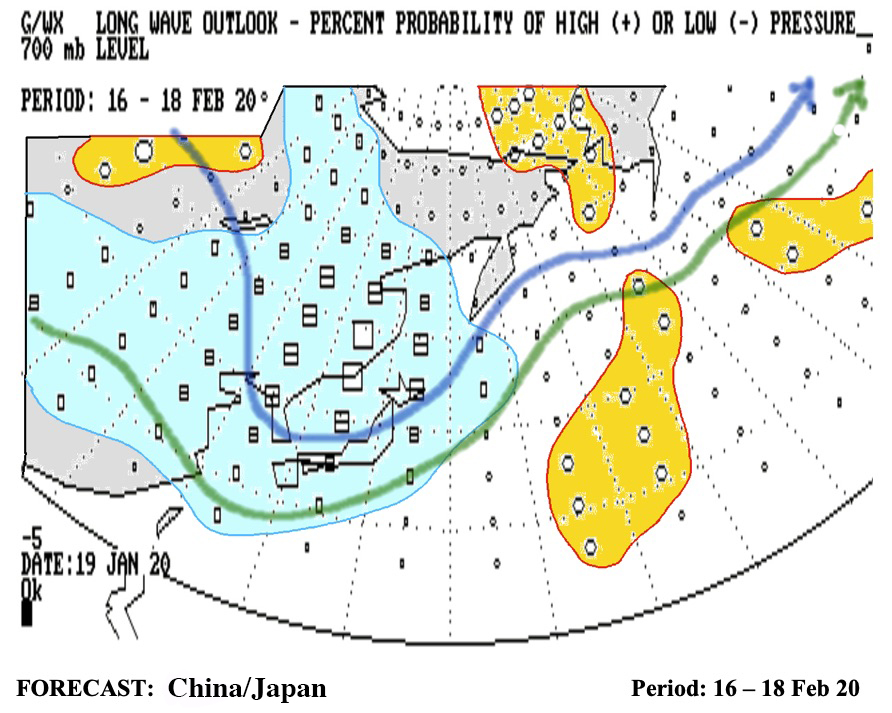 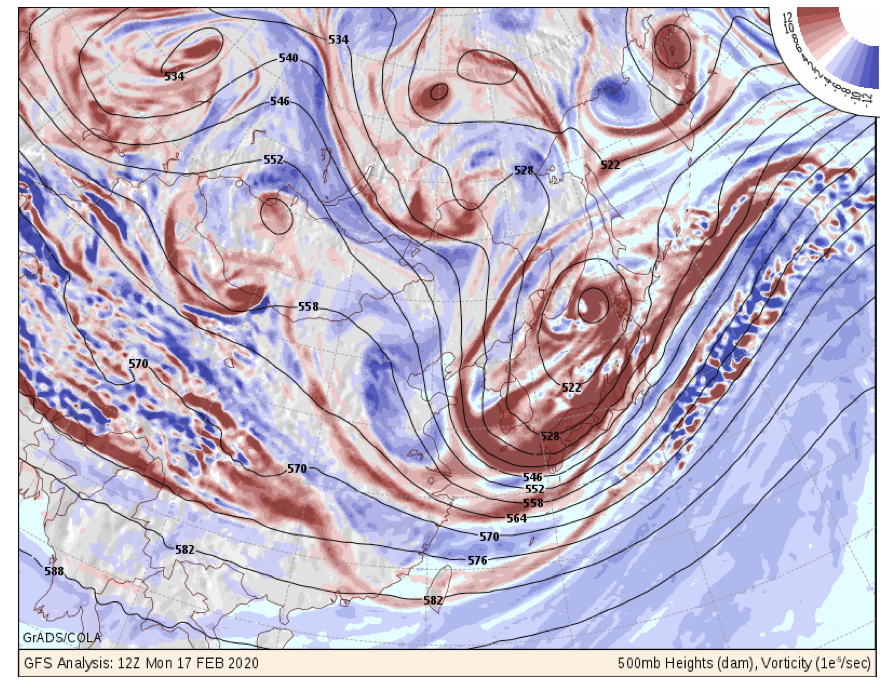 The Daily Weather Map (DWM) samples next to the sample North America G/WX Maps is the recommended source for North America. The 540mb line (5400meters) is the approximate polar jet core line, and the 570mb line (5700meters) is the approximate effective extent of the polar jet.  These lines can be ‘highlighted’ to give definition to the polar jet stream pattern. The polar jet stream ‘rides’ at a higher altitude, but its effect is mirrored in the lower atmosphere.
http://www.wpc.ncep.noaa.gov/dailywxmap/

Also, a good verification source is the 700mb map for this NOAA site (prior dated maps are also available on this site). The 309mb (309meters) line is the approximate polar jet stream line, which can be ‘highlighted’ to give definition to the jet stream pattern.
http://www.spc.noaa.gov/obswx/maps/

Additional source for regions in the Northern Hemisphere is this website:
https://www.weather.gc.ca/data/analysis/sai_100.gif

G/WX can provide no guarantees.   This unusual weather research project is now over 30 years old and on-going.   The average accuracy of the maps over this period has varied around 70%.   This means that about 30% of the maps will be incorrect.

The recommended way to work with the G/WX Maps is to follow these steps:

G/WX Maps provide probable atmospheric pressure predictions. It has occurred that the G/WX Maps have had a long run of proving out, though there have been times when one map or a series of maps comes up incorrect.  No refunds after purchase of G/WX Maps.